Beware Apple, Microsoft, The Atlantic, Google, PMLA and Others!

Why should these corporations/publications watch their step(s)? Because I am starting a company. And this company is associated with both publishing and technology…somewhat. Here’s a mock-up of my business card: 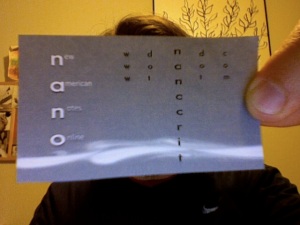 What is NANO? NANO stands for New American Notes Online. And the aim is to create a new type of journal of American criticism that is shorter, faster, and (most importantly) different. NANO will be the only academic journal (that I know of) that comes out monthy and has letters to the editor and has a twitter feed —which is currently up and running: http://twitter.com/nanocrit. The name NANO indicates small size and brief duration. What I like about the word nano is that it also connotes new technology that may change the shape of daily living. And NANO will, likewise, change the shape of American criticism.

← Prepping For Travel
TRANSITIONS and more of the same →